Carbon dioxide is considered to be well-mixed in the atmosphere, which is somewhat ironic.  Nevertheless, the reference measurement in Hawaii is considered good for the whole world.

Given a uniform thermal blanket, the hypothesis is that global warming should be uniform.  There is no mechanism for hot and cold zones.

This hypothesis fails with the satellite trends. 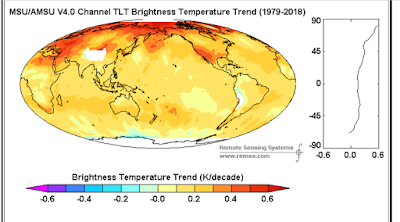 This is the trend map since 1979, expressed as a rise of C deg per decade.  All the trend is in the northern hemisphere.  The trend at the South Pole is zero.  This hypothesis is dead.

blah, can't think of one.