Another fine job without physics 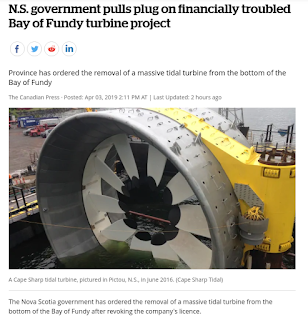 This was a totally political job.  "Let's place a turbine on the most vicious current-raked silt bottom we can find."  "Who needs that expensive physics?"

Suddenly it stops turning.  What sea monster is in it's jaws?  Or is it just buried in silt.  The only barge big enough is bankrupt, as well.  Even if they got the barge, I'll bet they can't pull it out of the mud.  Where are the underwater pictures?  Is the current too strong for a robot?  :)

ps.  that was my problem in the old company.  This sort of thing was my job.  I would have said "Forget it."  and then would have been blamed for being too grouchy.  :)

pps.  This is like the offshore of Pickering.  The silt moves in giant dunes, like on the Sahara.  If you just checked one thing, then you could anchor it on clean rock.  However, it's coming for you, like giant sand worms.  They'll be lucky if they even find it.

more:  Just on general geotechnical engineering.  The installation of drains and waterstops must be continually inspected.  The place will rust out in 10 years. 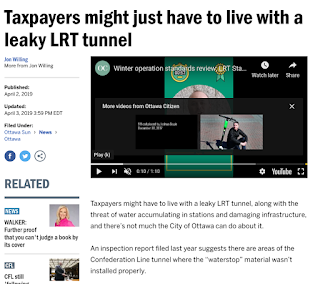 Another indication on why I will never work again (as if I wanted to).  I would have insisted on extra testing and a more fail-proof waterstop system, thus adding to the cost.  The Niagara Tunnel to Nowhere has no water problem, since it is flooded and sealed up.  :) It might be having a collapse problem, but we'll never know.