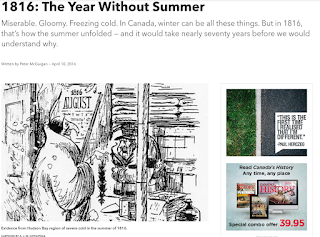 When Ottawa says they are breaking records for snow, they aren't breaking this record.

The world the Selkirk settlers knew was a cooler one than our own. They were living in the Little Ice Age, the interval between the 1450 and 1850 when global temperatures were between 1.0 and 2.0°c cooler than they are now. Within that, the settlers were living in what some climatologists say was a cooling trend between 1809 and 1820. And in the middle of that came the 1815 eruption of Tambora. For settlers living on the edge of existence on the central North American plains, its effects were very nearly the last straw.

I enjoy a legitimate reference to the little ice age, which I am calling a major ice age, as opposed to the 20 year cycle that we are now going into.  A major ice age does not go to a major ice advance because the land is still under isostatic depression from the last ice advance.  It takes about 10,000 years for things to pop up again for more ice.

But I have no context with the ocean currents, etc.  What were they doing during the little ice age.  Was the warm-up since 1850 really due to James Watt and the steam engine?  That's what our warmie friends would have us believe.

We can always look forward to 2 weeks in July, and then the snow starts in August.  :)