There is still no heat transport in the Pacific.  The Atlantic belt has started again, but it seems to make no difference whether it is on or off.  The Pacific is 10 times the influence.  And that's the main difference between physics and philosophy. 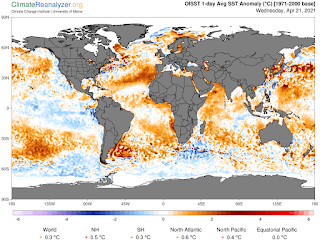 The sea surface temperature anomaly shows nothing going on, but the Atlantic is now dumping all the heat in a mid-belt.

Probably due to a lack of argo floats, you can barely see the current, but it is carrying all the heat energy to just below Spain.  I'm sure they like to throw all their floats into the old Gulf Stream, which now has no influence in the region.

Therefore, it will continue to be cold.  I have no idea as to the specific mechanism for the cold cycles.  When the Pacific turns off, we freeze in the North, but nobody else gets warmer.  Somehow, heat is being rejected at the equator.  Really weird.

ps.  Also, I have to suspect that a big tropical volcano in the Pacific belt does the exact same thing.  It shades the belt and stops a heat-absorbing mechanism.  So, we can assume that we'll have the exact same weather as a big volcano.  The warmies can't use that, though, because they don't do physics.