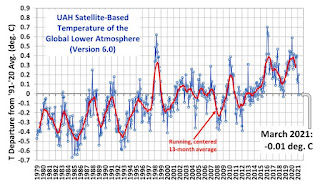 When these plots were going up, they were the favourite of all the warmies.  They would put on their straight lines and predict doom for all.  Now, all the plots are diving.  Does anybody report it?  Nope. 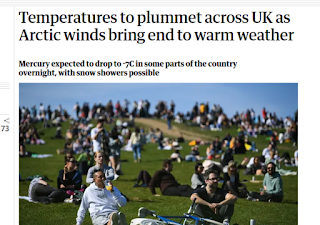 But even the warmie leader of the world has to report the cold.  Sooner or later, perhaps the good people of the UK are going to wonder what's going on.

ps.  don't be cruel and shove this in a warmie's face.  It's the only true faith they have.  Just point out that there's a lot of sales on sweaters right now.  The young uns spent all last week at the final closing sale of Le Chateau.  Coats for $10!

pps. so, for every previous physics disaster, they have managed to ignore it by not funding the work.  Who would fund work that shows them to be ignorant?  However, rapidly dropping temperatures cannot be 'covered up'.  That what makes this physics disaster more fun than covid or freon.

more:  It would be fun if their were hedge funds who bought global temp futures.  Such a big crash would be reported.

Thanks for the updates!
You dah man!

PS: we've got lots of seedlings on the go.
Today's supposed to be warmer.