Another cold blob attack for us 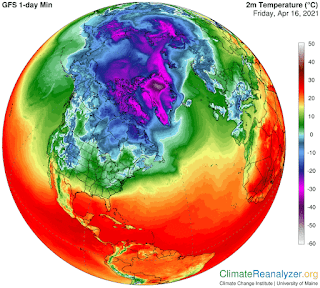 The Arctic air is incredibly strong for the middle of April.  It's still black over Greenland.  The Texas-style blob attack is still on France and hitting my buddy in the north of Spain.  Perhaps they laughed at Texas.

This cold blob, though, is more like an Alberta Clipper.  The Pacific plume has gone high, to the Yukon and is coming down on us, skirting the blob.  That should bring snow, not the crystal-clear air of a true blob.

I think my other source of world temperatures has thrown in the towel.  No use antagonizing the Biden Army.  NOAA put in all the extra temp charts when they were showing how hot we were, and they would be in a difficulty, should they remove them.  However, that could happen.  Physics is now under massive attack as we get cold.  But, we must assume that people can still stick their noses out the door.

We are now in the end-game of extreme cold versus the old warmie establishment.  A few of us may play the game 'This parrot is frozen', and they say 'It's merely resting.'  It's been 5 years of cold, and nobody has noticed it yet.  So, I expect another few years of 'denial'.

ps.  I suddenly realized that all the fantastic explanations of yesteryear for the cold, are gone.  That was the 'Dancing Jet Stream', and 'Polar Vortex Fairies'.  This year's explanation is 'Melting Arctic Causes Frozen Arctic'.  What will we have next year?

ps.  and I try to be so careful on cbc, but I have been deactivated. 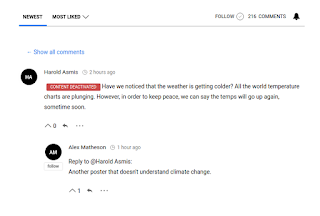 Ha, you got deactivated at CBC!
Join the club and wear it proudly