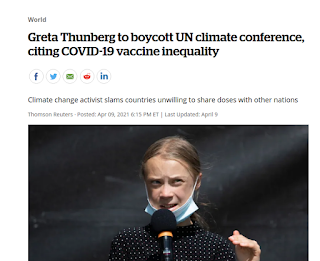 It had to happen, everything is freezing, and the UK can't plant tomatoes yet.  The far left is defined as that which totally rejects physics. logic and economics, and parades things that sound good.

She doesn't realize that she can only do so much for one thing, and thinks she has an infinite ability to do all things.  She would think she has not abandoned climate, but the reality is that there are only so many hours in a day.  :)  I would greatly admire her if solved that.

The climate thing has left us with a trillion dollars of wasted money on windmills, and solar cells.  All that money could have gone into stopping covid, but money was taken out of pandemic preparedness, as well as any preparedness, such as earthquakes.  The far left does not believe in economics and money grows on trees.

She doesn't realize, as none of them do, that billions of dollars were clawed out of windmills and put to making a totally artificial vaccine.  Five years ago, nobody would have imagined this.  As soon as they were done, they were shipped out at liquid nitrogen temperatures because the molecules were so unstable. We have astra, a bit more stable, but the far left is harping on the rare blood clots.  If we shipped that to Africa, they would blow that we are sending 'rejects'.

There is still a few more billions to get a stable vaccine that avoids extreme cooler issues.  And maybe that vaccine has a few more side effects, and a tiny percentage less effectiveness.  Is that a crime?  No satisfying the far left.

We all want the whole world to be vaccinated, just not there yet.

Anyway, they destroyed nuclear power, destroyed cheap freon refrigeration, destroyed clean coal, and caused China and Russia to dominate the world.  We can expect great things from them in the future.  :)

ps just read that again, and reliable electricity with cheap refrigeration is essential for the vaccine distribution.  We are stuck with a horrible refrigerant that requires an advanced degree in brazing to make it work.  Ask my old air conditioner.

I think if the left had not gone to town, we would have nuclear batteries to go with the fridges to Africa. Neato.

I put these things in comments because nobody reads them. They also foisted on us the 'Precautionary Principle' also called 'Feelings are Facts'. As long as one person in the universe feels 'uncomfortable' then ban the vaccine. :)

"We all want the whole world to be vaccinated, just not there yet."

That's not something I want at all.
I'd much prefer people have healthy clean food, clean water and quality shelter. That would do much more for their health then any vaccine.
Oh and not be terrorized by the state propaganda apparatus about viruses or climate change- fear demoralizes and sickens

That's because you're a vaccine grouch. Come into this room ... got a nice lottery ticket for you....

When you think about all the money that was used to create a questionable vaccine....

Already shown to be leaky with serious side effects so that some huge corporations will generate big profits- compared to simply putting that same amount of money towards food, shelter and clean water..it's a no brainer to me- what is more beneficial

that's what makes Greta such a turd. She wants vaccines to the 3rd world, so these same corporations generate profits etc., It's not because she cares. She's a hypocritical greenwasher- typical of the looney left crowd.

You forget she's being funded by the Russians for their loser sputtynick vaccine. :)

I'm just thinking that you and the Gretas trash astra for profits and 1 in a million, but spitnik probably has a death rate of a bottle of vodka. :) Or a bottle comes with every dose.

Is she being funded by the sputnik virus? Makes no difference to me.
Read what she's saying

"Inequality and climate injustice is already the heart of the climate crisis," the 18-year-old Thunberg said on Twitter.

"If people can't be vaccinated and travel to be represented equally, that's undemocratic and would worsen the problem."

What climate crisis?
Why would she want to travel and have others travel when the planet is on fire?
She lives a life of privilege and lectures others?
She's not trashing anyone for profits- she's there to help make profits.
She wants so called 1st world nations to pay for so called 3rd world nations to enrich pharmaceutical corporations.
And many of the peoples of all these nations including Canada which is pretty 3rd world IMO will remain poor, in despair, unhoused, lacking nutritious food.

Her words dam her.

This vaccine will not end the pandemic- It was never designed to do that. Because it does not block transmission.

For myself, no, I don't want to be experimented on. Nor does my hubby. This is entirely unethical and bordering on crimes against humanity.

Oh, oh, pass me over to Hydro Hubby (Safety First!). Will you be able to get into a nuclear station, you anti-vassers? The sputniker vaccine is the main one used now in the world's nether region. That new Canadian plant vaccine will be a real experiment. Perhaps we should include a spiff with every one? :)

left = victimhood. left = 'every financial transaction is a mugging ' greta = ' mentally ill teenager' the real question is ' who put the ding in the rama lama ding dong'

Ha, I apologize if I got a bit manic. That's why I'll never get a 'following'. :) But I would never get personal with all these people. I just think grets is a bellweather, no matter who is feeding her.