I'm just over a big bout with bronchitis.  If cronyvirus is any worse, just let me curl up and die.


For the 5 of you who like physics over 'influencers', the currents are quite interesting.

This is Alaska and the Bering Sea.  All this year the current has been going around Alaska and into the Arctic under the ice.  This has produced a big scour under the ice, and pops out to bury the UK in bitter cold.

Counteracting this has been the 'Halfsie El Nino', hen.


This has produced a very warm winter south of the 55 deg parallel, and hit the UK a lot with tropical plumes.  In fact, this is now touted by influencers as Proof of Carbon Warming.  They are saying that we are warmer than the 2016 Giant El Nino and that gets them a lot of likes.

Looks like the hen is dying, and we'll soon feel the brunt of that.

The hen plumes now feel as weak as I do after this cold.  Although the latest carbon article has a picture of the Japanese ski resorts, they are leaving out Scotland, which may be the best since the 70's. 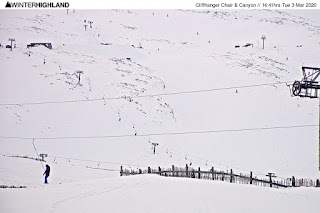 Such is the weird weather this year.  And such is the 'pick and choose' method of philosophers.

ps. and a HUGE female coyote-wolf walked by us at 100 m, just like a lion.  Well-fed and healthy eating the neighbourhood cats.  I would want to be farther away for her mate.  The ice age is coming!

pps.  My readership is slowly going down as more of my readers are bumped off by kardyshans.  I can't be responsible for their social death, so once again I am leaving the shrinking blogoverse.  As well, I am really suffering from the absence of my old man who was the only person that delighted in torturing warmies.  :)  After death, the warmies erased his name from history.