As we know, the US has no healthcare for millions except the charity hospital emergency ward.  As well, they have few test kits for the population.

This has resulted in a very weird curve that might make some people think that it's all over. 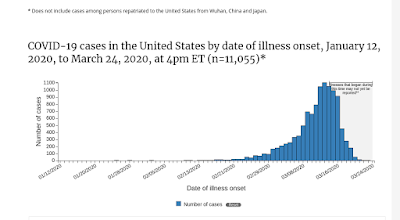 At some point, only deaths will be reported.  However, we don't know the fatality percentage.  In New York the cases are doubling every 2 days, and I think it's probably doubling (or more) every day.

Ontario is holding well, with a doubling every week.  A big number is close contact and travel.  Since there are no super-spreading venues left, I think it will start to leave this minor exponential soon.  The media is still trying to stir up outrage and anxiety, but that's the only way to make money in this world.  :)

"The media is still trying to stir up outrage and anxiety, but that's the only way to make money in this world. :)"

And annoy people- Was thinking about SARS in 03... the media, not including social media of course, had every one thinking death was at the door. I remember it well.
Surely you lived it more vividly then I did, from the other side of the lake, but, still the coverage was pure fear, all the time.

Everything is touted as immediate death. Everything runs on anxiety.