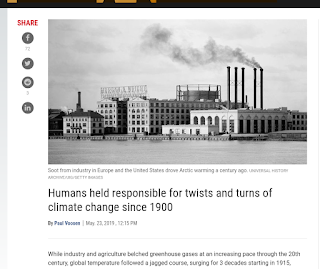 
It’s a compelling portrait, but it could have been substantially different if the team had used other, equally justifiable assumptions about the climate impact of aerosols, Booth says. Trenberth thinks the team’s adjustments had the effect of fitting the model to an uncertain record. “There is considerable wiggle room in just what the actual record is,” he says.

What is surprising, is the accusation of back-fitting, which is my accusation for the whole thing.

Note for Warmie Survival:  This is exactly sort of thing needed for your survival when everybody is freezing.  Hit hard in July, secure your funding.  Always use a different data set when dissing alternatives, than used for justifying the carbon hypothesis in the first place.

ps.  back-fitting was the greatest game for all the guys in our department.  The first analysis would show something failed.  But, with approval for more money, bigger computers, phony overtime, the problem would go away.

pps.  a 'hard back-fit' was done at the old place when the computer programs weren't spitting out the right results.  We won't talk about that.