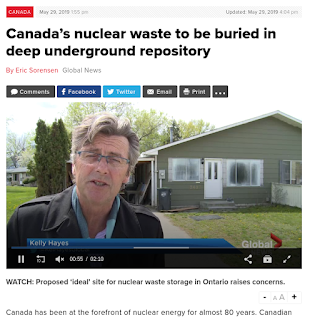 It's a nice long article that you should read.  Don't forget that anybody in this has something to push.  The point is that 2 deep disposals are needed, and does it make sense to build two?  This is where I lost it, because the normal thing would be to just push the Bruce Black Hole Thingy.

Now, it's worse to point out basic physics to these guys, than the warmies.  truds is pushing warm stuff but seems to hate this nuke stuff.  He has iced the bruce black hole forever.

So, it's quite exciting that they go against physics and geology with this black hole.  However, it will go ahead, and then we'll have some fun.  The memory of the Niagara tunnel to nowhere will fade with this.  :)

It is quite interesting that I had a lot of hours in the old company devoted to analysing this stuff.  Then they broke up into a separate group run by stalinists with their eye on the prize.  Such a Grand Stupidity.