Ok, I really hate all that 'meme' stuff going around the geoblogging circuit, but I'm doing this one from DrugMonkey, which is the first line from the first post each month. After this I'm going to go with my zero cash flow and zero-fy.

Composed of a giant stack of champagne glasses, those crafty Belgians are attempting to outdo Chalk River in terms of seismic unsuitability. More mud at the old Mud Volcano. They are compensating the victims, and diverting all transport away from the area. I'm not up on my mud volcanoes, but I wonder if this is going to be the biggest one ever!

Ha! San Bozodino has great faith in their signs: "If there's an earthquake, this building will kill you. Now, come in and enjoy 50% savings!"

It is a great dream of earthquake bureaucrats to either have a 2 day 'weather forecast' of earthquakes, or to have a 30 second warning.

I'm in another depressive low cycle with regard to the blog. Normally, every morning I go through a lot of special search terms on the news to find special articles. Now I'm finding nothing, or I'm uninspired.

I'm combining my very long boring stories on Knol, for future reference, since my blog has become ridiculously large and messy. The latest is Rock Mechanics.

This is interesting. If you've ever been around Sudbury, you are amazed by the Martian moonscape land all around. This is land that has been killed by all the acid from the big smelter. Now they have big airplanes dumping limestone and grass seeds, and it appears to work. Of course, I don't think your umbrella will hold up if you're right under a dump zone!

These are the comments about the process of the panel review for the DGR. It is exactly the same process currently being followed by the Bruce C dream. I don't know the schedule, but we should soon see a draft EIS which will be more fun than Bruce! Since this project is all about the geology, we should all expect a little more effort in this area (Ha, Ha!).

Those days of schmoozing local officials, and giving money to their mothers, are now history. Yes, Virginia, there is now a special rule in New York State against doing that. Of course, that's only for wind farms, anything else is open season!

I was going to save this as something the nuke-opposition people could spring on the Bruce Mob at their parties, but I don't even think they'll go. I always love a good party, but I can't take the stomach acid of a direct confrontation. 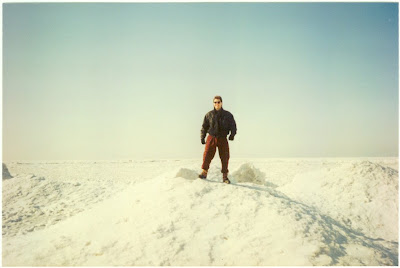