I love my faithful ad-clicker person, with your help, I should be able to get through this.

So, as the story unfolds, we had this hare-brained idea handed down to us from the top. In those days, we had a powerful geotechnical/geology department, who could actually pull the big red cord on stupid ideas. Not any more!

We began by an investigation, which is always the way to start things. You may not know this, but of all the Great Lakes, Lake Erie is just a mill pond. It is very shallow. 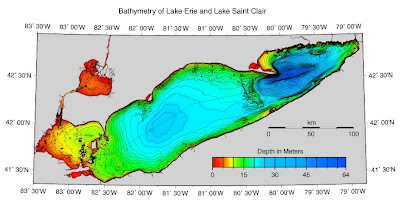 It does eventually get down to 60 m, but that's as deep as my cottage lake! The project would consist of many separated lines, for cooling, since they got bloody hot! They would just lay on the bottom and be cooled by lake water, and it was so simple, it was presented as a SLAM-DUNK!

Once we got the bathymetry, we went for side-scan sonar. Inside of the sound waves going up and down, you put the beam on an angle, and look for scattering. It looks exactly like an air photo underwater! When we did the survey, we were looking at something pretty horrendous! Namely, there were these huge gashes all over the lake!

We had no clue what they were. They looked like giant plow furrows! Finally, one of our guys shot a famous video (wish it was on youtube!), in the middle of a very cold winter. It showed that a pressure ridge was the perfect analog of subduction plate tectonics. The wind-pushed ice was coming against a pressure ridge, and was subducting at about 1 foot per second. You could see the stuff just piling in! Now, we all know about ice from the Titanic, so for a 3 m pressure ridge, we were going down about 20-30 m!

The problem was solved! Lake Erie had huge monsterous ice plows! Of course, only then did we crack the secretive gas industry. 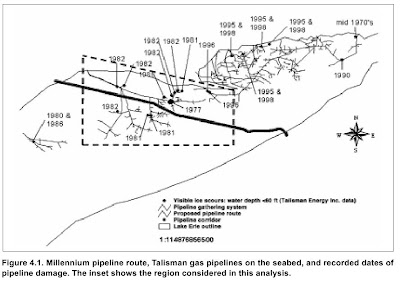 Turns out the nasty buggers had pipes all over the place, and they were always being ripped out by ice! They didn't want to tell anybody, because it looked bad. So now we were faced with the fact there were these giant nasty ice ploughs ripping everything up!

Now, the cables had to be buried, but how deep? We eventually came to the conclusion that they had to be buried 3 m, which was horrendously expensive, and the pipes would cook themselves. End of project!

Now, the lesson for a nuclear plant.

And thus ends any hopes of a nuclear plant.

Okay, here's how I think they're addressing lake issues. Their saying they'll use a "closed loop" system where they basically refrigerate the cooling water using the towers and a big reservoir.

The closed loop, if it ain't science fiction, ain't quite closed with the steam going out so they admit they'll need a small amount of water to replace the steam but that they won't be drawing a huge amount of water for cooling.

They say this cooling method will sap about 3% of the output of the new reactors.

Now, I ain't a plumber or a nuke engineer or a geologist or a tugboat driver. If some smarty professor tells the assembled rubes that they'll suck in the water through a big floppy rubber hose that can withstand the ice, they'll buy it.

The expert egghead in charge of the EA is a guy called Moffett. They got another egghead Prof. Boreham from Mac. These guys put on a good meal and BS spouting session in 4 little burgs last week. I went to one of 'em. They said eatin' 4 bananas a day was a risky bizness. Good food, like you said one time.

I've seen those big ridges when they were right up on the beach in Dover a few years ago.

I hope yer on the money with this here ice trouble and the other seismic stuff. They just tell the rubes that they're gonna build it to meet magnitude 7 or 8 and that's all there is to it.

Keep on boogin', HaroldMan. Yer bound to make a killin' at it, I reckon. I been thinkin' on puttin' ads up on my little boog but I ain't got much techie know how an' I only get about 30-odd readers a day.

Wow, a closed loop nuclear plant at 40 below? I am just imagining this giant lake of ethylene glycol! Wow, do they want to keep the party going! Oh well, this will be a lot more fun than I could ever imagine! And I was just worried about cooling towers in arctic conditions.

Seismicity- they don't have the standards to go beyond 'moderate' seismicity, which is a US coefficient of 30% g. If they want to talk about a 60% g plant, I'm stunned.