I just got a newsletter from OneMatch which is the web site for this sort of stuff. 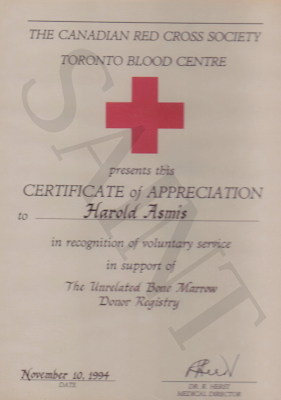 There it is, my certificate. Reminds me of a story. In the early 90's I was a happy guy at hydro, and donated a lot of blood and plasma. Now, my blood is so chock full of antidepressants, it would be illegal! I signed up for the unrelated bone marrow program, knowing it would be a million to one of ever being called. Lo and behold, they called the next month! They test for about 6 or more allotypes, and you have to be right on most of them.

That means this person somehow had middle-German origins, and was a pretty close match. I went through the procedure, which meant going to hospital. In those days I had to go to the old depressing cancer hospital Princess Margaret (since replaced). I was sharing with cancer patients, and very glad for my health. The operation was quick, but they bore a lot of holes in your spine. I was out and dancing the next day! (As far as I remember).

So, to help these people out, I recommend that everybody who donates blood sign up for this. I really recommend doing the blood for a while, so you see what it's like, and it helps them establish your general ruggedness.


ps. there's a sad part to the story, which is why I don't tell it much. The transplant was a success, but the person died in the process from infection.
Posted by Harold Asmis at 2:11 PM