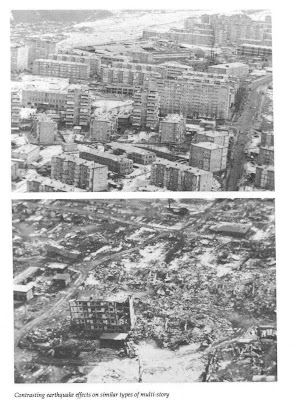 BEFORE AND AFTER
Article

Of all the earthquakes that have happened during my long, long, long career, this earthquake has the most impact on me. On Dec 7, 1988, an earthquake of unimaginable power (grossly misrepresented by wimpy M7.0 rating) hit Armenia. There was nothing left but concrete dust! Sure, this was Soviet building, of a style now represented by North American condos, but this earthquake was special.

It led me to believe that some new science was at work here. After many years, I came up with my 'Fist of God' theory, which I have expounded on frequently. Unfortunately, engineers have largely ignored this type of 'extreme pulse' earthquake, and have focussed on stupid sinusoids. The Japan Nuclear Earthquake came to bite them, but they have ignored that, as well.

Every time you hear some Bruce Nuclear person dissing earthquakes, remember this!
Posted by Harold Asmis at 9:25 AM