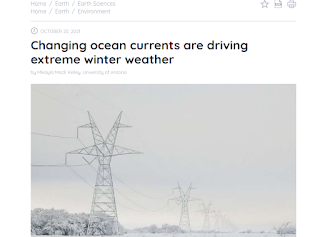 The last two good physics papers had huge 'apology' endings.  They said that although physics ruled all the previous temperature cycles, this last one was climate change, and please don't kill us.  This worked, since the cbc warmies just read the last bit.

This paper is interesting since they are working with the current cycle.  They correctly identify the huge energy amounts of heat energy, but say that this is stopped by a little Greenland melting.  They go on to say that the melting is causing the cold in Texas, even though Greenland doesn't melt in winter.

Basically, they say that Greenland melting is causing extreme cold in the Northern Hemisphere during winter, and that it has stopped the Gulf Stream.  But why would the melting continue if it is biting the hand that feeds it?

So, all in all, a rather horrible concept.