Another small patch of the heat engine is going full blast.  Doesn't help Europe much.

You can see the interlocked vortexes going full blast.  In the Atlantic, the vortexes are always singular and they spin off.  This type of assembly has some fantastic physics, which will never be measured, since nasa is doubling down on their story.

These cyclones are pinned right now, and casting off tropical plumes that are going over the mountains in NA.  We're getting that in Toronto, along with Gulf air which gets sucked up into the warmth.  Without physics, we can't tell how long it will last.

You can see that we still have our October heat wave.  This will enforce the story of great warmth, but the global temps coming out soon might not be so high. 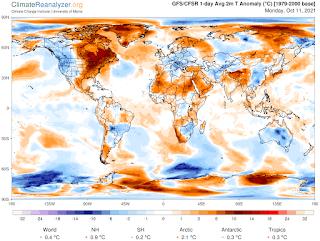 ps.  as a mechanism, the current is going from east to west.  The heat engine must be a more efficient way to gather solar flux, or it wouldn't matter.  I'm suspecting a lens effect down the middle.  The physics would be easy to do.

ps.  although this looks like a heat engine, the shallow waters may reduce the world impact.  The sea temp anomaly map has no signal for it.  It's not showing on the Arctic ice volume.