This is just interesting physics.  I have used both charts to explore the 'cold phase' of carbon warming.  This year, ice has been big.  Antarctica has been extremely cold with the largest ozone hole.  The Arctic ice is setting new records, and, perhaps, the unmeasured Greenland ice sheet is still melting -- ha.

Once the cold weather gets settled in, the Arctic air becomes clear as .. ice.  That's because this chart shows water vapour that can form rain, only if, it meets very cold air.  The plume air all comes from the equator, and carries about 10 times the heat energy of dry air.

Right now, the Arctic is full of this warmer, moist air, and this is wobbling the ice indicators. 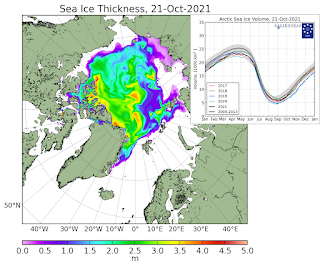 The poor Danes have been labelled a 'denier site' by the cbc warmies, but this is good physics.  The end of the curve has bent down a bit. 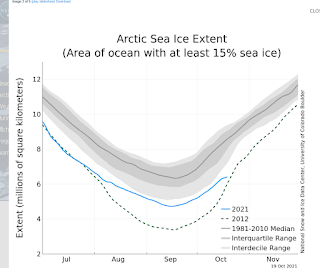 The Arctic ice extent is more dependent on winds, but it was going up and is now curving down in time for coppy26.  Doesn't really mean much.

The weather in the UK is totally dependent on what the next plume will do.  A direct hit gives them warm weather.  A miss, freezes them.  In the old days, when the Gulf Stream was a factor, you could see the plumes zooming up the low-pressure trench of the warm water, and always hit the UK.  Now, they almost always miss.  The UK is now enjoying their proper latitude weather, which is Labrador.

ps.  to be petty, I'm thinking of the biggest blizzard to hit Glasgow in history.  The physics allows it right now.  And then the 'explanations' would be hilarious.  But, such wonderful things never happen...

pps.  you can also see that the Arctic is unusually warm on the temp anomaly map, while we are cold.  You can expect the cbc warmies to just mention the warmth. 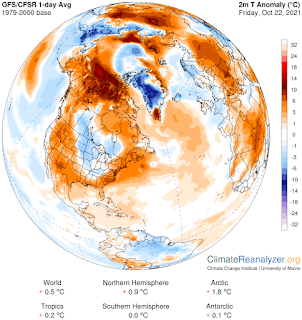