Equality in the Canadian Workplace is Breaking Down

This is an interesting trend.  The only reason that California zoomed ahead is that they pay people 3 times more if they are 10 times more productive.  They use the infinite number of tax dodges so that these people get the take-home pay.

Mushy does the same with spaceyx.  The opposite are eastern outfits like nasa who pay the same to everybody.  They can't shoot a rocket out of a paper bag.

In Canada, everybody gets paid exactly the same in take-home pay.  A company must have a hundred sub-divided job titles to get a tiny pay differential.  Internal political operatives rise up and get the money.  Brilliant people who bring in 10 times the money aren't paid anything.  And they had no choice.

Until now.  Now, they can say to Mr. Big - Screw This!  Mr Big says, look, we are going to jam you into a cubicle farm and not pay you anything, while you have to suffer 3 hours a day on a broken subway to get here.  Ha, ha.

But, The Brilliant One, can say they'll only work from home.  And while working at home, why do I have to work for Mr. Big?  I'll work for myself.

This only works for the Brilliants.  Average people in the office are out of luck, and these people work very hard and demand 'equal pay' but they are a pile of doo-doo.  I worked with them at the old company, and the ratio is ten to one for the doo-doos.

The doo-doos can work from home, but they'll be replaced by people working in India, where lunch is less than a buck.  Right now, they can't fill the slave farms in downtown Toronto, and I doubt they ever will.  Sad. 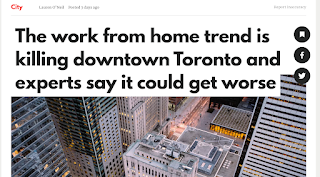 Can they fix this?  Brilliants are introverts and hate office politics.  Can you design an office to attract them?  Quite a challenge, and maybe some of them are anti-vassers. blah.

ps.  it is funny that the Canadian style of management is that of Stalin, threatening all those below them, and terrified of the people above.  We probably need a new model.

pps.  I have often written of other ways to organize.  It would good to assemble teams like the old mission impossible, Mr. Phelps.  You would need a non-hierarchical organization.  Generally impossible.

more:  I know of one group of brilliants, who bring in a lot of money, have said they are never going back to the dumpy office, and are passionate anti-vassers (or so they say).