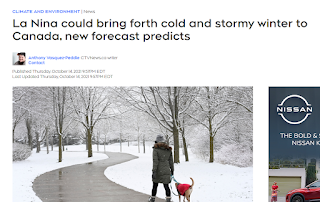 La Nina, a cold weather event that normally occurs every three to five years, has surfaced for the second consecutive year over the Pacific Ocean, the U.S. National Oceanic and Atmospheric Administration stated in a news release.

The Pacific is cold and it looks like it will be cold for years.  The weather people have no physics to define El Nino and La Nina, just descriptors, like hot and cold.  We, who are fans of physics, know that cold water has poured in from Antarctica and quenched the Pacific heat engine.  It's like a large tropical volcano.

The UK has had its 'Year without a Summer' and will continue to have these.  This year, the cold is being fobbed off with La Nina, and the Polar Vortex Fairies, and next year will be the same, same, same.  As long as people are willing to pay to confirm their beliefs, we will have this.

'Cold is weather, hot is climate'.  I'm not making any projections, because that would be 'bad thought', and I'd get cut off.  I'm just commenting on the weather.

ps.  according to this chart, 2 years in a row is almost nothing - just weather.  3 years in a row would be something.  Since this sort of thing is chaotic, I can't say anything, but I think a long ice cycle would have a permanent La Nina. 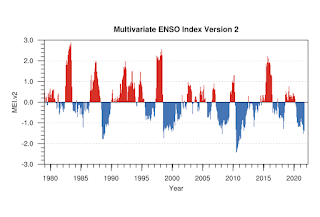