This paper was fascinating. Every year, the marathon starts from Staten Island and goes immediately over this long suspension bridge. Thus, the marathon starts as a progressing step function load, with a very sharp front (hot-shots!), and a long raggedy tail (old guys!).

What they did was to put both accelerometers and real-time GPS on the bridge to see what happens. They tried to make it sound serious, like it's relevant for earthquakes and all that crap, which is what you probably have to do in the States, but we know it was just for fun!

The accelerometers measure fast vibrations, like something you would feel. The energy would mainly come from all the pounding feet. The GPS measures slow deflections, and the bridge deflected down about 350 mm.

Here's a model of what the runners did to the bridge. 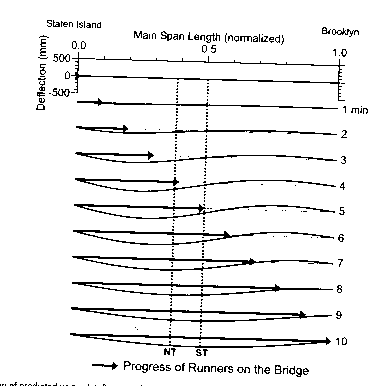 The runners come as a wave, and excite some very low frequency vibration modes of the bridge. The period (7 seconds) is quite a bit lower than you would expect from earthquakes, and vertical would not be a major thing in an earthquake. But it's good fun!

Finally, they attempted to stitch together the GPS and accelerometer results into one very broad-band record. This might be the most important part of the paper, since we are deploying a full range of stuff for earthquakes: seismometers, accelerometers, and GPS. It would be important to know if we can just use broad-band seismometers with GPS, and ditch the accelerometers.
Posted by Harold Asmis at 8:49 AM