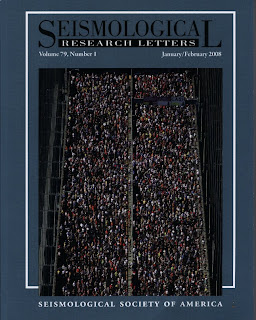 And it's a real good one! The front cover is the NYC marathon as it crosses a long suspension bridge. One article discusses the use of accelerometers and GPS to monitor the passage of the marathon, and how it excites different vibration modes, from regular traffic. I love accelerometers, since I spent a good part of my brain juice installing a system at Darlington.

I'll discuss the other articles in time, but first we'll go over the main opinion piece. This was written by Thorne Lay of the University of California, Santa Cruz (what a place!). The title: "Is Bigger Really Better?". Basically, he is being really careful, since he is stuck in the rotten system, but makes many points how each science effort has to parade in front of Congress, because nothing else is funded any more. The NSF money for small seismic money is being sucked up by ocean research vessels. Only the 'earmarked' glamorous things get funded, like "drilling the stupid San Andreas"!

This poor guy has to say everything 'between' the lines! He wants the small, valid projects funded. We are blessed to be in Canada, where there have been several 'big' initiatives, but they go through the normal grant process. Our seismometers were funded this way! Bottom line is that I will never see Anna, Ohio, monitored like I would like it to be.
Posted by Harold Asmis at 1:53 PM