The sea level for November is low and steady. 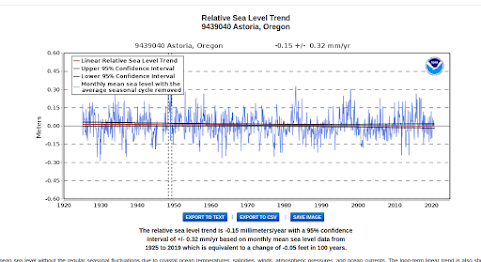 This sea level station is the only one in the world that has remained flat all these years.  With all the others, the land rises or sinks.  Naturally, the warmies only report those that are sinking, like volcanic islands in the Pacific.

I like this station because the sea level is like sticking a thermometer where the sun don't shine.  It always reflects the complicated satellite method of determining the world temperature.  That has remained steady for now, but I'm expecting it to continue going down.

We now have scientific papers that opine all previous world temperature cycles have been due to chaotic changes in ocean currents.  They wimped out with this cycle because their colleagues would throw Merlot at them in the faculty club.

My big question in geophysics is 'Where does the heat energy go?'.  I had thought it was a simple transfer to the Southern Hemisphere, but it looks like the whole world goes cold.  I can think of a new hypothesis, but it needs 'in situ' physics measurements and all that money is going to carbon reduction.  The warmies state that all physics was done in 1850, and that we know everything.  There is no hope for physics and math in this world.

They'll all get degrees in Social Media.  Yeah!