Pacific is colder than ever

An ice age is the gift that keeps on giving.  The Pacific current is very strong to the West, but it is cold. 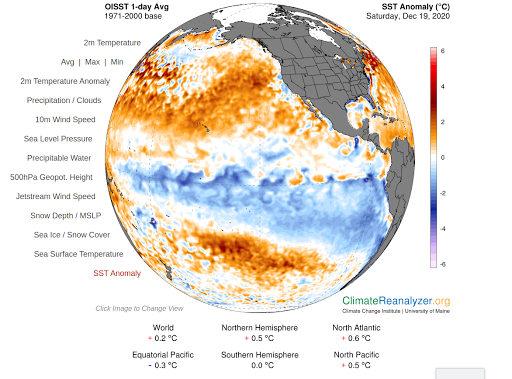 Suffice to say that I've never seen this sort of cold, even after the big 2016 El Nino.  Anybody who says this is normal is blowing cold smoke.  The big question is how long it can go on.

We are falling into a common 'mini ice age' which is a 20 year cycle like the 70's.  Every year it gets colder.  The warmies keep up their spirits by announcing this the 'sixth warmest year', then the seventh, and then the eighth.  But this is since 1980.  We don't do a good job with the 30's or the 60's.  Everything in the past is ignored.

We didn't have these maps at the beginning of the other ice ages.  I wonder where the heat energy goes.  This sort of ocean movement (cold water in the Pacific) could go on for a long time.  I used to think that the heat just goes to the Southern Hemisphere, but it is now showing as much cold as the North.  A great mystery.

ps.  we can use this projection as fish wrap.  They drew a straight line on a very small bump in the temperature charts. We won't hear anything more on this, as they will abandon the charts again.