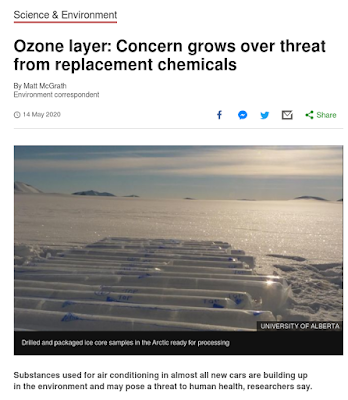 Without physics, we descend into madness.  We are now at a state where every single replacement *, dreamed up by the leftie English Majors, is making things worse.  They join the Bible Trumpers as the biggest losers of all time.  :)

We know that nutsa jumped whole hog into this because it sounded good, and shed the shame of the shuttle.  Nutsa saves the world!  However, their own people with the atmosphere chamber told them that the famous chlorine reactions can't take place at -96degC, and near-vacuum.  Who'd a thunk it?

Now, you would think that any substitute would be checked in the atmosphere chamber.  Who knows what happens in the stratosphere?  But no, nutsa torched that thing, and replaced all the earth people with venus people.  So now we have a rain of deadly chemicals.  Good job, people!

the leftie english majors and the bible trumpers are all extremists.
whatever label they identify by- they are extreme

The greenies, warmies, leftie english majors, or, and I know I'm going out on a limb here by suggesting that somebody might actually be directly profiting on this, how about a big petrochemical company which makes the fluorochemical replacements, a company like, say, Dow Chemical?

People in the HVAC industry realized this was a scam a long time ago. Regulatory capture. Not much money to be made on a refrigerant/propellant that's cheap as LP gas. Or actually *is* LP gas. The first changeover went so well it was inevitable the replacements (they were largely replacements, not drop-in substitutes) would eventually be found to need redesigning. If it fits nicely into a larger agenda, so much the better.

Very interesting blog, by the way. I was really wishing I'd have more time to prepare.

I just think it was nasastupidity, and then they went on to do the carbon thing.