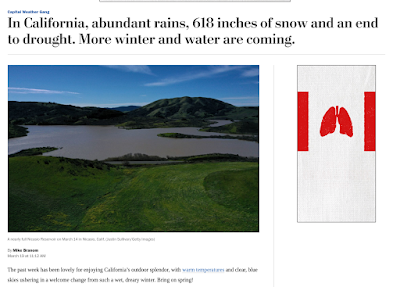 It's quite neat that during our 20 year warming period, the plumes went high to the Yukon and curled over, missing Callie entirely.  Thus they had a huge drought that emptied the dams.  The water system is designed for 7-year droughts and this was much longer.

Another Atmospheric River Storm (ARS) is hitting them now, but it is weak.  The next plume also looks weak.  The UK is now getting the last strong plumes.  Callie has had 20 of these storms this year.

Meanwhile, the Arctic is cruising along at -40.  That means we will get lots of winter until late April.  In the little warm blasts I can prune my trees.  This year, Toronto will probably get frost to the middle of May, so take care.