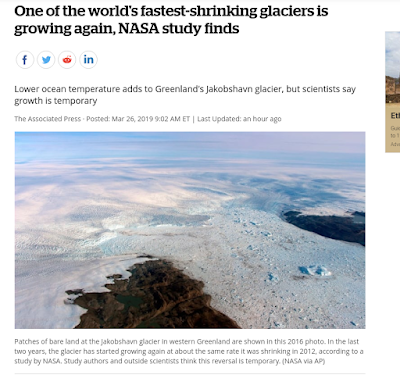 If you follow my blog then nasa is agreeing with me.  It's been growing for the last two years, just like Arctic ice.  The Atlantic is turning over, but only 'temporarily'.  Now, this is the right hand of nasa who is fighting the left hand.  They have to go into semantic somersaults to save themselves.

"That was kind of a surprise. We kind of got used to a runaway system," said Jason Box, an ice and climate scientist with the Geological Survey of Denmark and Greenland. "The good news is that it's a reminder that it's not necessarily going that fast. But it is going."

Did you know that an exponential runaway reaction can go backwards?  Yet it does.  The carbon hypothesis has no provision for back-sliding, yet it does.

A natural cyclical cooling of North Atlantic waters likely caused the glacier to reverse course, said study lead author Ala Khazendar, a NASA glaciologist on the Oceans Melting Greenland (OMG) project. Khazendar and colleagues say this coincides with a flip of the North Atlantic Oscillation — a natural and temporary cooling and warming of parts of the ocean that is like a distant cousin to El Niño in the Pacific.

Here we are saying the turnover of the Atlantic is as temporary as El Nino.  Yet it has been responsible for huge climatic shifts.  And it doesn't come every 7 years.  I really like this, but the best is yet to come.

While this is "good news" on a temporary basis, this is bad news on the long term because it tells scientists that ocean temperature is a bigger player in glacier retreats and advances than previously thought, said NASA climate scientist Josh Willis, a study co-author. Over the decades, the water has been and will be warming from man-made climate change, he said, noting about 90 per cent of the heat trapped by greenhouse gases goes into the oceans.

Now we are getting into the meat of how they will handle the coming ice age.  Ocean currents are having a huge effect that swamps the carbon hypothesis, but it's only a blip.  We won't do any measurements on the 'greenhouse' thing, since anything we make up is solid.

Now comes the icing on the cake, it's like bitcoin and Toronto housing, only with no physics whatsoever.

What's happening, Joughin said, is "to a large extent, a temporary blip. Downturns do occur in the stock market, but overall, the long-term trajectory is up. This is really the same thing."

In the famous comedy routine about Noah's flood -- "How long can you tread water?"  How long can these 'Gods of Global Warming' freeze, and continue to say "Any minute now, it will start to boil again."

They've lasted two years, and since it their lives on the line, I'd say another 10 years.  All the rich kids in the elite universities can go into their classes.  :)

Forest says "climate change is like a box of stock fraud, you never know how much your gonna lose"