The State of Oklahoma Earthquakes

I could also call this 'Physics' instead of state, but who cares?  As I wait for the ground to thaw, I am miserable that all my climate physics was right.  I'm leaving that behind, since it snares me in my own web of cold.

On to earthquakes!  I have new readers who don't know the background, and we didn't have any most of last year.

Oklahoma is a state in the centre of the United States of America.  It was mostly farming until they discovered oil, and that's the whole economy.  As they don't have to use their brains to live, they are big into the exact words of the bible.  Now, they've discovered the Internet and are hot into 'Liberal Conspiracy Theories'.  They were 100% trumpypants. 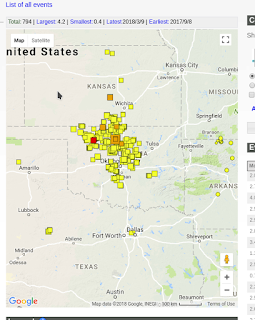 Then they discovered earthquakes.  They were injecting deep saltwater for a long time and never had an earthquake.  They can't separate saltwater and freshwater in their records, but the freshwater came in and the earthquakes started. At the same time, the volumes of injection increased tremendously and the geologists blame that.

These earthquakes start up every Spring when the freshwater comes in.  It mostly comes from gas fracking, so you can correlate natgas prices with earthquakes.

Anyway, it builds up.  **This my theory and my theory alone.  Nobody who has to earn a living can go with that.  :)
Posted by Harold Asmis at 4:46 PM