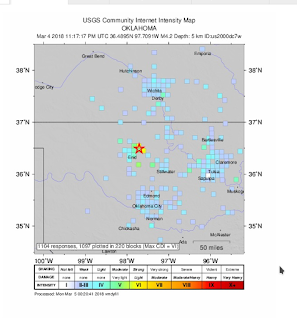 You'll probably never see this felt distribution anywhere, perhaps never again.  All around are equally sensitive points that report earthquakes, so this is real.

Now, somebody is sleeping at the switch because I'm not getting any of the usual stuff I need.  No fault mechanism, no seismometer reports.  Yuck!  Now that there is no warming, this is my only interest.

Anyway, a strike-slip felt zone is narrower.  This is a medium-depth thrust, the type we can expect when we have m7 day.  At least 2 m7's, one like this, the other a strike-lip.  Nearly all the seismic energy will go NE, straight to Toronto.  High rises and waterbeds... Have fun!

The cold weather will use up all the natgas reserves.  Expect gas fracking to go through the roof (or the other way).  Trucks will line up in OK.  If this really is an m5, then it confirms the rate of an m4 a week, and an m5 a month.  Apr-May will have an m5 a week.

ps.  the extra stuff came through, and it wasn't a thrust, but medium depth normal, m5.

pps.  well, that was hilarious, there were two m5's, each a slightly different mechanism.  That opens the spring season of higher energy rate.