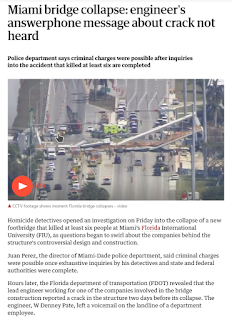 This is the o-ring guy saying 'Uh, it's not good.'.  That Miami engineer was forced to phone a dead line about surface cracking, just to cover rear ends.  Then they may have been so internally scared that they conducted a load test with the traffic underneath.  That's the Chernobyl part.

The article also alludes to the bizarre qualifications system, where every state fiercely protects their inbred engineers.  This hits hard the trumpy states.

**I'm just following this for now.  I'm sure it's going to start to get so stupid that I turn it off.  :)  Don't forget that all this goes double for earthquake engineering.

ps. as an aside, we were shown the two videos about these disasters as a warning about bureaucratic (group think) engineering.  But they are more of a blueprint now.  :)

pppps.  Whatever you do, don't mention the company.  They sue anybody who looks at them sideways.  I'm leaving this subject.
Posted by Harold Asmis at 7:20 AM