This is fun speculation, the good part about science that never gets outside the ivory walls.  We used to call this 'corridor talk' or 'beer gab'.  Such talk is the heart and soul of science, and it has been killed by the PR department, and the need to be 'never wrong'.  Canada is talking about pouring billions into science, money we don't have, but it will be wasted if it goes down conventional channels.

I've written a lot of advanced computer analysis, the type that is never used for conventional earthquake science.  One such method is 'discrete element' modelling.  It looks at the fundamental physics between particles or elements of a fault. 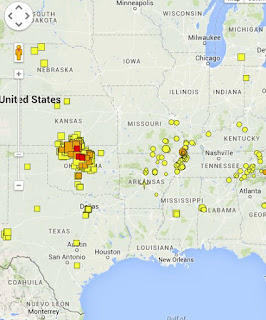 One observation from this analysis is the tremendous distance a strain pulse can 'diffuse' through fractured rock.  In an elastic medium, a strain disturbance cannot go more than about 2 diameters from a disturbance, such as an excavation.  With fractures, there is almost no limit.  Depending on fundamental properties, there can be a slow diffusion out to several diameters.

The Oklahoma mechanism acts as one big excavation in fractured rock.  The injection of gas frack waste causes strain relief, and the effect is exactly the same as if you were cutting a big hole.  My hypothesis is that New Madrid is now feeling this.

Unlike 'Consensus Science' or 'Adhoc Mucking', this hypothesis can easily be shot down by further observation.  If we have another major strain event we can see if NM is affected a few days later.  If not, then we're golden.  If it is, then we should watch for the main thrust fault extending beyond the old shear wings.  That would be fun!