Oklahoma earthquakes back on track 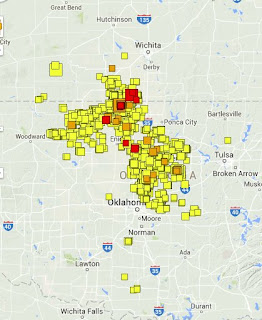 There was a big flurry of earthquakes yesterday.  They are tracking the northern fault, with compression earthquakes at the end, just like Cushing.  For a while the system appeared to be resting.

Add:  Cushing just had one of its high intensity shallow thrusts.  m3.6

Add2:  Watch this little video.  Look at the crappy state of the oil tanks.  And those berms are a joke.  I had to fix one once.  They are designed by people who can't do math, and have a special valve that is supposed to let out the water, and is made of the rustingnest iron.  :)
Posted by Harold Asmis at 6:55 AM