I shouldn't be writing this, but here we go again.  This is a deep normal earthquake with the 'hammer' going into the Earth.  That's why it is being identified as 6-ish on the other side of the world.  A bunch of these on the fault, and I'm going to issue Alert #2.  :)  As I was saying on g+, I estimate we can go up to 10 'false' alarms.  A random 'Italian Cluster' has a 1 in 100 chance of going on. 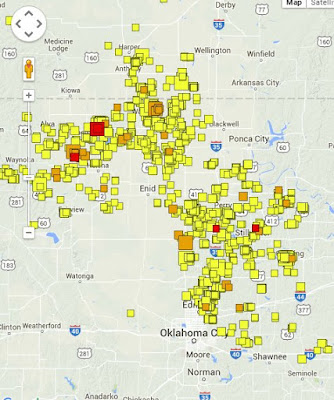 I expect another 4 of these 6-ish earthquake before I issue another yellow alert.  This time I'll go beyond knick-knacks as my count goes up, probably into practising 'Duck and Cover'.  :)

PS:  Com'on Big Busgus, slip in some strong motion instruments.  You'll never get another chance to record a 7 up close and personal.

PS2:  The M3.5 right after it was a shallow thrust.  We should really expect the thrusts to get bigger.
Posted by Harold Asmis at 5:48 PM