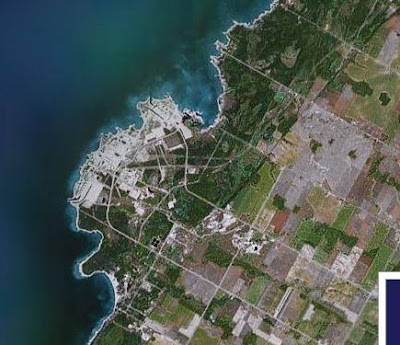 Since the cash has started to fly, I would open up the session by telling what I know about the site. I won't cite references because there aren't any! This is the most unstudied area I know. All information is safely hidden in-house.

I first became aware of the site, when I first joined the big company, 28 years ago. At the time, they were building a water intake tunnel, which was so leaky you had to wear a heavy raincoat to go into it. I was terrified, and never took up the opportunity to visit. To dig that tunnel, they had to use trainloads of grout, and they still ran into a huge cavern. Now there's a dog-leg in the tunnel, in order to go around it.

At the time I was taking stress measurements all over Ontario, and I always found high stresses and solid, tight rock. I could not believe there could be such an area where the rock was so bad, so I made a study of it. I wrote some of the results in Paleocollapse.

As such, I formed a hypothesis, which was testable:

Hypothesis One: The paleocollapse was caused by the dissolution of the deep salt beds under the limestones. There should be standard, solid limestone under the former salt beds.

Hypothesis Two: The salt beds and carbonates were laid on the soft hanging wall of the Grenville Front (megathrust). This eventually resulted in extensive fracturing, and the dissolution of the salts.

Both hypotheses can be tested by drilling a deep hole, which is now being done in-house. I just worry that all the results will be spun towards #1. They have to proceed, no matter what, because they have left no alternative. They hearings will conclude that they should proceed, on the proviso that if they find something politcally unacceptable, they will stop. No scientific criteria will be set.

For interest, look at the Google picture. All of the paleocollapse is below a cliff that runs NE, parallel to the Grenville Front. The area NE of the plant shows the sinkholes, and is exactly like an air photo I once saw that was done before the plant was built.
Posted by Harold Asmis at 9:21 AM