The marvellous mechanics of the subduction zone 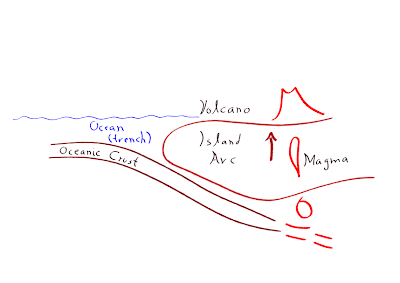 I'm trying out calligraphy with Inkscape. You can add mass, tremor and other neato stuff to mask your normal horrible strokes! I'm still improving, but already I'm better than Brittney in an MTV concert!

To answer that question, we have to look at the mechanics, which is slightly different than the other articles I have written. First, I poo-poo the notion that the oceanic crust is pushed down. All oceanic crust eventually gets cold, old, and tired (like me!). It eventually sinks under its own weight, like elephants going to their grave site. Even New York City will (one day) have its own subduction zone!

As show in my great figure, this slab tends to fall at an angle, and rub up against the island arc complex. Mechanically, this slab is really goopy, full of water and sea-shit (see my Carbon Cycle articles), and has different properties than regular earthquake rock. Once in a while, the descending slab gets hung up on the upper rock, and slippery bathtub feet engage (from Fault Mechanics).

All the normal mechanisms for earthquakes now apply, but the dynamic friction drop may (or may not!) be greater because of all the goop. The important thing is that this is an 'upside down' thrust fault, with the moving element being the slab. As such, the rupture, and the high velocity pulse goes downward.

This reduces the impact of the shaking, but things are not so happy for the inhabitants of the ocean shore. The combination of the rapid slip downward, and the attendant push upward on upper crust, makes for some dramatic ocean wave mechanics. It's like suddenly getting up in your bathtub! If we are lucky (like this last one), most of the oceanic energy gets beamed down to the penguins, who can take care of themselves.

As in my beautiful drawing, the oceanic crust eventually gets a nice warm, peaceful death, and the water-carbon gets pooped out at the top, to cause some other problems for the locals....

Of course, the island arc actually gets pushed by all this, and on the other side we get the juicy high-speed thrust earthquakes that cause so much trouble, for their size (as in the Japanese nuclear earthquake).
Posted by Harold Asmis at 9:47 AM

How'd you get to be so smart?