As I have mentioned previously, one really huge fault whips down through Toronto and Hamilton. Now it happens in my many travels and fishing trips, that the most dramatic scenery is associated with earthquakes. If you take the beautiful seacoast road down from San Francisco, you can see these marvelous terraced beaches. Each terrace has been created by a huge M9 earthquake! If we didn't have earthquakes, everything would be ground to a pulp, and be as boring as Toronto!

This fault appears to be most active at Hamilton, and the spectacular topography is a result. 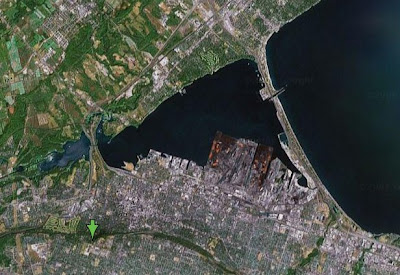 Good old Hamiton is located at the west end of Lake Ontario. It is noted for its stinky steel mills, and less noted for the swamps everywhere. In fact, I was told these swamps are extremely deep, and have blocked decent railroad access for years.

I have been playing around with Digital Elevation Models (DEM's), and viewers. I was using 3DEM to great success. Here a shaded relief view of Hamilton. 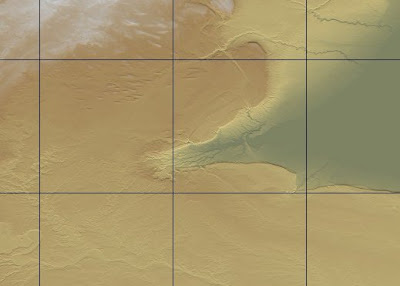 That great big gash in the Niagara Escarpment is the Dundas Valley, which was also a major glacial lake drainage outlet, and affects the sediments in Lake Ontario for a great distance. Nobody has really wondered why it is there.

The real fun with 3DEM is taking oblique views. Here's one, shooting down the fault. 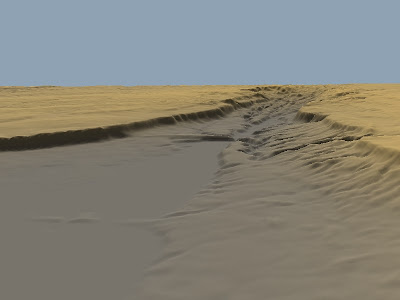 Now, don't you wonder about Hamilton? The view would be much more spectacular if we could remove the sediments. Then you would see something! We did a lot of geophysics out in the lake, where you can get an idea of the depths of the swamps.

Why do we even care about Hamilton? First off, the scenery is nice. Second, all those swamps are formed by an active fault, somewhat like sag ponds, but over a much longer time. They are doing a lot of building in those ponds, and I think it is somewhat dangerous.

The next big earthquake in that area will be a high-speed thrust, much like some of the more destructive earthquakes that hit Japan recently. The damage intensity will have a very narrow zone with a high Peak Ground Velocity (PGV). The deep swamps will amplify this ground motion 10 to 100 times. The damage will be incredible! This earthquake will blow out the electricity and natural gas for most of Southern Ontario.

Yet, we merrily go on, ignoring this threat, not doing the slightest little thing to mitigate the disaster. Such is the power of living memory! We remember Hurricane Hazel, because it happened, yet this earthquake has the same general odds of happening. Just hope your house is on solid ground!
Posted by Harold Asmis at 10:07 AM

I hate to break it to you, but central California hasn't seen M9 earthquakes for 20 million years. Those marine terraces are from a combination of changing sea levels during ice age cycles and the uplift of the Coast Ranges (which does involve earthquakes - but the way you've worded it might give people the impression that each terrace is associated with a single earthquake, and that's just not true).

Oh poopies, I'm completely wrong! And they're downgrading those magnitudes in California! Now 1906 is a 7.7! How sad. California will have a tough time busting 8 now. Thanks for commenting.

I hope Hamilton's not going to bust loose! How much motion or strain is there now?

Hamilton is regularly popping along with M2-3's in the lake. Usually, these rates are a factor of 10 below California, but the deep swamps and lack of preparation make up for that!

I would call this zone as good as Cornwall, or Cleveland, which have had mid-5's in recent times.

Did you or one of your colleages write a rebuttal to Dr Arsalan Mohajer's claims regarding earthquake risks due to an alleged fault underneath PNGS? If so, I'd like to see it (I work for a relevant government agency)? I'm sure you can find me. I'll keep track of this post and comments.

Yes, we did a lot of work on that. I steered the investigation to be 'open source' in that it was a scientific investigation, conducted by notable scientists. I believe that everything got published in the Can. Journ. of Earth Sciences. If you got the bucks, you can pay for it! I think I wrote something about this in one of my many previous anon. blogs...

Thanks. I'll hit the lit search and go find it at the UofT library.

Is there any confirmed scietific evidence of this fault or is this conjecture on your part based on your past experience?

Confirmed, scientific evidence is mostly behind the 'paywall', and in the walled gardens. You can't get anything out of these guys, because they'd rather step in shit, than into controversy. So, all you have is my conjecture!

I appreciate your conjecture assuming it is based on solid scientific evidence.

I always try to include as much scientific evidence that I can get on the Internet. That said, this is a solid thing, based on my years of experience and gut feel.

There is no way you're right about this. The earthquakes we get are associated with the movement of the St Lawrence Fault, and are felt much stronger elsewhere.

The Escarpment itself has remained unchanged for 20 million years, it's about as solid as natural walls go - even though it's comprised of shale. We don't have any major fault breaks in the shale (any pictures you see where you can see the open face of non-eroded shale are man made). At any rate - even if there was some sort of missing (and completely inactive for 500 years) fault it would have torn the escarpment apart long ago, due to the underlaying shale's fragile nature.

What you're seeing in Hamilton is nothing more than the normal uneven erosion of ancient bedrock. Nothing more.

Thanks for the comment. I put out all this stuff, and get no feedback. I think that's worse than people arguing with me, since it indicates absolutely no interest in geology or earthquakes.

To see if I'm right or not, you have to go the geophysics. The deep crust controls the surface features.

H
I find this fascinatin.
Whem we drive around, I ask, why is that feature there. What happened?
I wonder that others don't seem to ponder these things.

Congratulations on your retirement and thank you for sharing your unique insight with us. Interesting career. Further for me, it would be fascinating to see the bottom of Lake Ontario.

Even if our leaders don't prepare for the possibility of such an earthquake, I could do more to prepare for such an event and feel poured concrete basement walls will fare better than concrete blocks. Perhaps I'll add some jackposts on the original part of my house where we have 8" blocks which break into pieces when subjected to push/pull force...

If you are in the Hamilton lowlands, I would add earthquake insurance.

Hello Harold: I just stumbled upon this article and found it very interesting. That one pic where you show a topography map of Hamilton, where exactly is that green arrow located? Is that in the downtown area or on the mountain?

I read other people's comments too..as far as I'm concerned, anywhere in the world can have an earthquake at any time. There are places that are at higher risk than others. With Hamilton and Southern Ontario, I believe we can have one or more. There is a few faultlines in Lake Ontario that have been discovered years ago and have had small quakes from them in the M2 to M3 range. I was just wondering exactly where this fault line you're talking about is. If you could reply back, I'd be very appreciative of that..thanks again.. :)

The arrow just showed up with Google. We can take an earthquake fairly well with a tiny bit of preparation. My point is that this zone is as good as any, and 'nary a clue'.

Thanks for the speedy reply Harold..You said that we can take an earthquake pretty well with a little bit of preparation..I don't believe we'd be okay if a say an M7 hit us. We wouldn't be as bad off as Haiti, but we'd not fare too well. I'm talking about Hamilton and surrounding areas mind you. Our buildings aren't up to code or our houses. I'm pretty sure that my house would crumble if an M7 hit and downtown Hamilton would be leveled and have loss of life..I guess the only preparations we can make would be to teach people what to do in a quake and after a quake ect..Earthquake Hazards website has good information on what to do during and after..Another thing to ask as well, wouldn't downtown Hamilton be subject to liquifaction being as it's near the lake and some parts built on sand? It's just a guess of mine. I was just wondering if we're in the same boat as New Madrid in Missouri and we don't know it..Thanks and sorry for being longwinded again..I find earthquakes very interesting and I read up on them from time to time....It would be scary and yet very interesting if this part of ONtario was an earthquake zone..ttyl..

Glad there is such a site as this for the "Wonderers"...

How safe is land over a gypsum mine if an earthquake hit; and what strength would it have to be to disturb rock and earth?

Or cause land erosion above the mines?

Is this even possible?

Mines are not generally susceptible to earthquakes, unless there is a water problem. An old mine has more chance of slow progressive failure to the top.

I am just in the middle of reading Simon Winchester's book - The Crack at the Edge of the World, all about earthquakes and the San Francisco Fault and other faults.
Very interesting about the deep drilling at Parksfield to read the geology of the many faults there.
I knew there was a fault running through the middle of the Great Lakes.
I recall an earthquake in Ottawa in 1933 (I think).

it is interisting that up in the Dundas area are the sulpher springs and artisian wells, http://www.vex.net/~aac/2010%20Hamilton%20Deer%20Dundas%20Valley%20Natural%20Area%20review.pdf and to the east & north of Burlington, you can find breccia boulders of cemented gravel as big as a house. I did a non published study of deep rooted faults in 1990, showing the Hamilton fault intersects the Don River fault in Toronto and both end up at a point near Utica New York. The most interisting item noticed, is these fault zones have nuclear power plants on them.

It is my theory that all intellectual life is attracted to faults. Where you have no faults, like Pt. Hope, it is dull.... :)

Hi I live up on the niagara escarpment(aka hamilton mountain) just wondering how you think the mountain would fare in an earth quake? When I'm down in dundas I always look up at the escarpment around it and think...gee this looks like a soup bowl down here...

The escarpment is hard rock. You're fine up there, not too close to the edge!

Oh thanks, sorry it took me so long to get back on here. I feel pretty secure up here and no I'm not too close to the edge of the escarpment!!!

I have been doing some lake bottom surveys in Lac Ontario, using Google Earth. It seems you can see deep rooted structures, south of Toronto Island, with fingers pointing in the direction of Oakville and Burlington, There are also some pot holes under the lake that look interisting

Those fingers might be the rock pop-ups, or stress ridges. There are numerous gas pockmarks. The bottom sediments are disrupted, which I suspect comes from the period large earthquakes.