Once in a while, during one's career, you can come across something so astounding and unbelievable, that it is totally boring to anybody else. Thus, goes the story of the greatest discovery ever made at OPG, but it was totally ignored due to its horrendous effects. It's as though somebody stumbed upon atomic power, and said 'Oh my god, this is dangerous!' and shoved it back under the table.

It all started back with the very first Candu station and the very first fuel bundle. As we all know, the raw uranium is separated at the mine, and the toxic mine tailings are left. This is chemically purified and more radiactive junk is scattered around Port Hope. At this point, we have about 99% useless U-238, and about 1% of the good U-235. This stuff is all heated and glued together in a wonderful hard ceramic, which would pass right through you, if you swallowed one!

Candu designers faced the fact that this stuff is almost impossible in a reactor. Most of the world gave up on it long ago, and now so has Canada (see 'mildly enriched'). Nevertheless, at the time, they put the ceramic fuel into these cutsie fuel bundles, so that heavy water could flow all around the fuel. 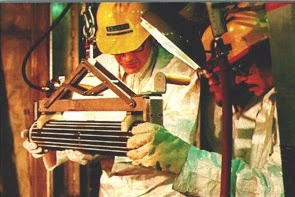 Here's another image in cross-section. 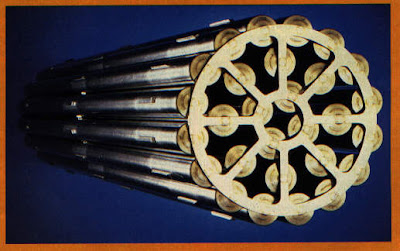 They built the first Candu's with these, and they have never been changed, as far as I know. The heavy water flows through these at a good clip.

Then the Candu designers had a problem. The first reactors were a paltry 500 MW, which was hardly worth building. Let's up the power! (they said). They made the reactors bigger, but there was a scaling problem, so they jacked up the water velocity going through the bundles. They didn't notice the first hints of problems at Bruce B, so they jacked it up again at Darlington.

We can all see there must be a limit for the flow velocity, but what is it? An obvious one is cavitation, just like boat propellors. But, our friends hit innocently hit something much worse, well below cavitation.

We know that when a hollow metal tube is compressed, it bows out, just like those 'finger traps' in the dollar store. (I loved those as a kid!). If you look at the cross-section of the fuel bundle, so will see that there is a reduction in the flow area, and thus increased resistance to flow, if you push on it.

The bowing of a tube is marvellously non-linear, just like buckling. You can increase your loading on a tube for a long time, and this is a great demonstration for the kiddies: see how many books you can balance on paper-towel tube, you'd be amazed!

Well, I've got to go back to peeling apples, continued another day....
Posted by Harold Asmis at 10:50 AM

Someone brought what they said was a fuel rod in to CFTO one evening. The guys didn't really believe him because it was only about an inch long. So he threw it at someone and it shattered. They swept it up and put it into the wastepaper basket. It was black. Could it have been a real fuel rod?