To start with, we have to delve into the bizarre world of the Candu nuclear station. This is always touted as having the magnificent feature of on-line fueling, but in reality, the plain-jane uranium fuel is so difficult to get going, that they constantly have to shove in fresh fuel. Now I know you're imagining little radioactive men stoking the fires with shovels, but the boring truth is, that machines do it all.

Now in this station, there are 4 big Calandrias lying like pop-cans on their side.

Inside each calandria are hundreds of pressure tubes, like this. 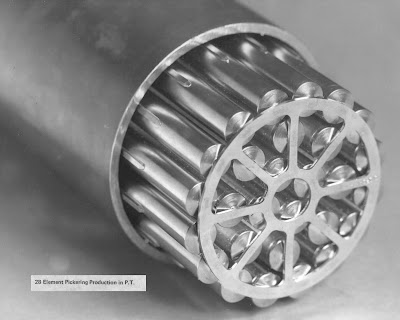 And inside each pressure tube are a whole bunch of fuel bundles. This is where all the heat gets generated, and the uranium 'burns'. Eventually, these fuel bundles get tired, and this is where the magnificent, Rube Goldberg fueling machine comes in.

This thing (more than one) trundles along a big underground railway, like Thomas the Tank Engine (lead-free version!). When it's time to get to work, they latch on either side of a calandria, like so.

They hook on like an automatic tank-gun loader, and shove a fresh fuel bundle in one end, and eject an old one out the other, all without spilling a drop of precious radioactive water!

Now this machine is the most wonderful mess of hydraulics, water pipes, and electrical cables. It has to get supplied with lots of power, and how do you suppose they do it? That's right! With a Power Track, which is the star of the story.

Here is a simple power track for some sort of machine. The idea is that the upper machine can move back and forth, and the cables are laid down in loop. All the main elements are there, such as the chain holder for the cables, so they don't rub. If you ever took apart an old pen plotter, this is how it worked, and you ink-jet printer has one. 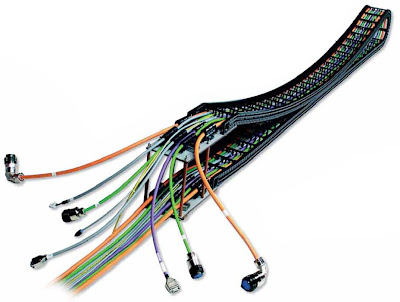 The ones on a nuclear plant are a tad bigger.... (to be continued).
Posted by Harold Asmis at 4:13 PM