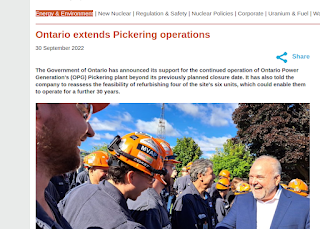 A year added year after year.  All the German lefties shut down their plants which are ten times safer than this one.  And they want Pickles to go another 30 years.

I can't say too much because its the old company, but I remember someone once saying (maybe it was a dream) that this is the most dangerous plant in existence.  I didn't believe that guy at the time, because of Ukraine.

However, there is good reason to believe that the odds of a major release that wipes out Ontario is at the one in 10,000 per year.  This is good for nuclear lip-flappers, because it hasn't happened yet in their lifetime.  But, we used to want to go for 1 in 10 million for that sort of thing.

Somewhere, deep in the archives someone has written the 1 in 10000 earthquake scenario.  Pickering was designed with 1960's assumptions on earthquakes.  However, I give a good chance I won't be around to take the iodine pill.  :)