US August temperatures well in the pack -- NOAA 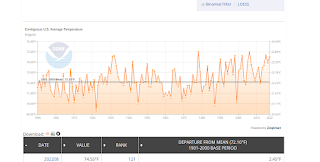 The continental temperature depends on the season.  That's why they plot it as August-only temperatures.  It is meaningless for the world temperatures, but they tout that, if the results are good.

When the oceans shut down, then July and August temperatures tend to zoom up.  That's because we all become 'Death Valley'.  The sun is overhead, and there's no wind.  A classic solar furnace.  At night, most of the heat leaves by radiation and convection.

Next week, we'll have their world temperatures.

ps.  today's number is 8.  -- The average temperature for August across the contiguous U.S. was 74.6 degrees F, 2.5 degrees above average, and ranked as the eighth-warmest August on record.