Acid rain for the Arctic 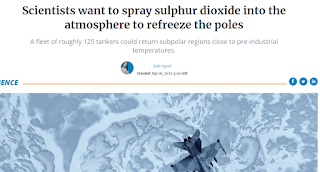 These are all the fine ideas, when you have no clue about basic physics.  Of course, the acid rain would kill everything.

We regularly get a natural form of this.  When a big sulphur volcano erupts on the tropical belt, the world cools.  The physics is unknown because nobody does physics in our brave new world.  Most likely, it interferes with equatorial belt heat mechanism.  I have a hypothesis but it can't be tested during our little ice age, because I don't see anything like that operating right now.  I also suspect, that should we have such a volcano right now, it wouldn't do anything.

We do know that a big sulphur volcano near the poles does nothing.  In the old days, there would be a famous physics person pooh-poohing this spray idea, but they were all forced out by the Popular People.

However, no matter what, this idea will be dumped along with 'iron in the oceans'.  PP's can't rub two sticks together and make anything work.  Maybe when pig nosa rockets can fly.