The mechanism of drought

There are only 6 people in the world interested in physical mechanisms.  All the rest are perfectly happy with lip-flapping. 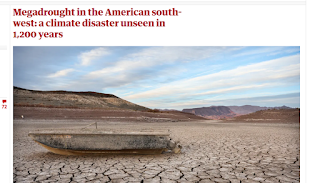 There is a certain artistry to lip-flapping.  It is driving us to freeze in the dark, but it is so elegant.  However, you will be happy to know that the Popular People got so much money from all this, that they put it all into housing speculation.

For all of modern history, the west has suffered droughts.  Entire native settlements were abandoned with huge droughts.  It can come again, but this time the pp's say it's clange.  Ever since the oceans turned over into the modern pattern, California has enjoyed a 7 year cycle of drought, then intense rain.  The song is 'it never rains but it pours'.  Suddenly, the pp's have made this into a new thing.

Our new new pattern is that the Pacific Ocean has gone cold.  This is the pattern of the Little Ice Age, maybe, who knows?  We now have tons of modern measurements.  But the modern mechanism is clear:  there isn't any heat energy to blast the west with rain.

On the mimic, you can see that the weak plumes are going north to Alaska.  That gives us cold sweeps in the east.  Soon, those sweeps will be at 40 below.  But there is no energy to break through the mountains.  It's all stagnant air, and that makes things a parched desert.  Sucks to be the west, but maybe a large earthquake will liven things up.

We still got another year or so before the lip-flappers lose their charm.  A big depression can make us all rather sceptical.

ps.  ha, don't bother visiting Australia for the next 300 years.  They are going back to constant gloom, which was the weather before the white guys showed up.  :) 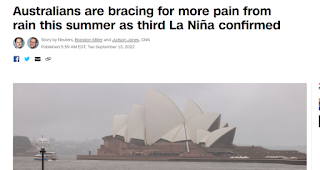 Lucky for me, no Australian reads anything.