Toronto house site gets away with geotechnical murder

A very aggressive builder has decided to build a monster house on a lot near us.  Not a mere ugly house, they wanted a Russian Billionaire house with a full tennis court in the basement.  As you know, RB's are going down deep in London, to bypass height restrictions.  For this house, there is notorious sand lens that produces quicksand if you dig.

A geotechnical note on quicksand.  It's not like in the Tarzan movies.  It's merely a result of a high upward water-flow gradient that lifts the sand grains.  However, it is denser than water so you just float on it.  If you drop a hunk of steel on it, it will sink.

So these guys started digging the basement in the normal way.  They got away with digging right to the property edge.  After 4 feet, everything started to collapse, and the neighbours' trees all tilted.  Basements cracked.  Then they went for soldier piles and sheet lagging, what you see in the big buildings downtown.

Naturally, they only did this for the really bad sections.  The rest was allowed to cave in.  Then they hit the quicksand.  They pumped out a ton of water, laden with silt into the storm sewers.  You can't pump out quicksand.  They got away with that, because the City is working on real murders.  Amazing, because you can't do a speck of construction near the Humber River without tons of ridiculous silt barriers.

So, the Toronto building inspectors and politicians are asleep or their hands are tied.  The Toronto Conservation Authority probably doesn't know.

Even if they handled the quicksand, the sump pumps would pour out tons of water into the sewers.

Very laughable to geotech engineers is that they attempted to pour footings on the quicksand.  The concrete just dissolved into a big puddle, adding caustic concrete water to the environment.  Is somebody not feeling the pain?  Does that stop them? 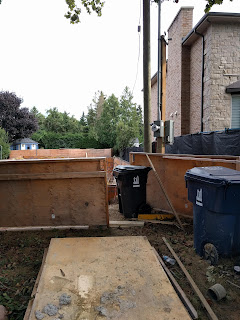 No, they have assembled super-high forms for the tennis-court basement.  They just tacked them over the quicksand with no footings.  The building inspectors are aware of this engineering violation and are sitting in their holes.  Now, it has rained a ton, and the water will be 3 feet in this swamp.  They'll drain the silt into the river again.  I can't wait until they pump in the concrete.  Three trucks later, they'll wonder where the concrete has gone.  Into the danged river!  Poor fish.

This is a real environmental disaster, as opposed to the other things that the loony left likes to push, like plastic straws and palm oil.  Wake up and smell the silt!

ps.  please excuse the vagueness.  This guy has high connections and would sue anybody who looked at him sideways.  :)

pps.  This is a work of fiction.

add:  Yeah, they're pumping today, a nice liquid mix.  The concrete will dive deep into the quicksand and stabilize with a free-form caisson.  Done all the time.  No corruption here.  The water was magically pumped out overnight.  The show is over.

OMG!  They poured the walls and they didn't bloop.  Of course they settled 6 inches while setting, but they just plastered some concrete on top, and all's good in fordland!
Posted by Harold Asmis at 9:34 AM