Some UK forecasters starting to get on board 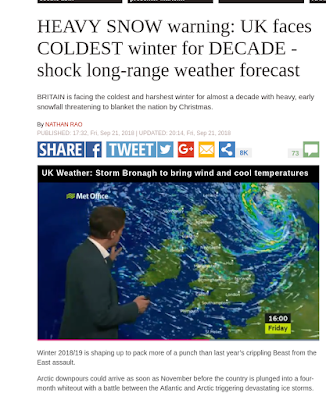 Fine, just when the Guardian isn't running any more 'commentable' global warming articles.  I wanted to gloat, but I'll be freezing as well.

I was going to say to them that last year's Beast from the East will seem like a picnic.  There is not a speck of heat left in the Atlantic.  That hurricane was the last, and it made so much press as 'caused by carbon'.  Ship in the ice salt!

ps.  the bbc is against all this, they it will nice and mild.  Interesting.