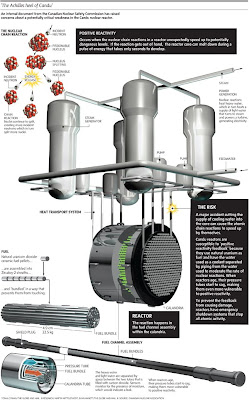 Here is a fine example of what happens when self-similar organizations totally drop the ball. Used to be when the CNSC and OPG had credibility, they would just pooh-pooh this whole scandal, and people would believe them. I once asked "What are the consequences of packing your organization with toadies, and losing all pubic confidence?" As I said, the outcome is PANIC!

The problem here is what I always thought was a major safety hazard - the focus on the incredibly bizarre Humungous Guillotine Break in the Heavy Coolant Pipes. (LOCA) There is no physics to support this scenario, yet it dominates nuclear safety thinking. Once they accept this as true, then they are off on their own, unfettered by the laws of physics.

So this old worry is a rare wrinkle on something that is physically impossible. If you have this big break, then if another set of nearly-impossible things happen, like the control rods losing gravity, then the pressure tubes may mash together and heat up. Then the incredibly thick concrete containment and giant vacuum building will disintigrate. And, of course, it will happen to more than one reactor at the same time.

So, the consequences of focussing on this singular event is not greater safety at the nuclear plant, but a general overlooking of all the other zillion minor things that can go wrong, and do have a chance of happening in random clusters. For example, the central cooling pipes are massive, and totally seismic-proof, but there are many other minor issues I have railed about in the past. I'm not saying anything because currently I am entertaining the possibility that they might pay me something (just as possible as a LOCA!).

ps. the cottage was great, and we spent time fishing for the invidious rock bass. When I throw them on the dock, the dog grabs them and takes them up on land.
Posted by Harold Asmis at 8:21 AM

It's ok. They're not going to build any nucs.