The Physics of Pumped Storage

Pumped storage is back in the news. Obviously, if you are going to have these stupid windmills everywhere, you need to store energy for times when the wind doesn't blow (like all summer in Ontario!).

So, they have latched on to pumped storage, which is a geotechnical job extraordinaire, and requires basic physics. This is something the Political Power People don't do very well! 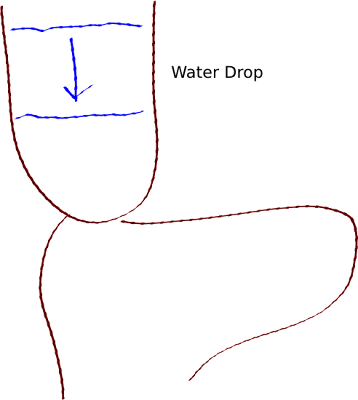 Here it is, my efficient 6 L toilet. The 'power' of the water is related to height, max at the top, and zero at the bottom. This toilet only takes the top 6 L, to maintain 50% power at the close of the flush. The old toilets would run to the bottom which is generally useless. These stupid toilets never wash out the minerals accumulating in the tank!

Now, a dam is the same as my toilet.

The power generation is happiest when the dam level is at the top. If we let the water drop, we are spinning turbines for nothing, like pissing into the wind! Most dams have power systems sized for the general average flow. In the spring, they let water spill over the top, and they usually spill at night.

In order to make a dam useful for minor storage, you are going to allow the headpond level to go up and down. That means the turbines and lines have to be 'oversized' for peak power. Some dams near Ottawa can do this, and they run only during the morning and afternoon peaks. They kill a lot of trespassers, because the water can suddenly roll down the outflow like a wall! Varying the water flow causes a lot of erosion, and other fishy problems.

Still, the capacity to do this is very small. To do this properly, you need to build a new headpond and dam off to the side, and up a hill. Then you actually pump up water at night, and let it go through turbines during the peak times. Ok, but here's the Catch 22 - if you build these things, you don't need stupid wind power! You can capture all the excess nuclear and dam power at night, and there's a lot of it.

Needless to say, these are a bitch to build. Where do you find the space? The Niagara pumped storage has marginally stable side walls, and they want to raise them. Would you build them on bad geology? They are useless for wildlife. I just can't see them getting built, and they are useless far away from the demand, due to transmission losses.
Posted by Harold Asmis at 8:34 AM