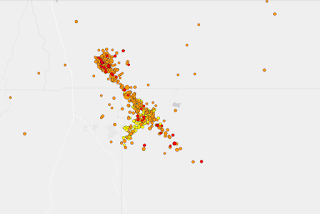 First a thrust on the lower spur, then a larger strike-slip off the spur.  Next we'll have another large strike-slip on the other side of the thrust spur.

A classic compressive mechanism, all according to rock mechanics.  Our fav. busgus will be totally surprised.

Also, please note that all the earthquakes in the past 10 years have proven their 'early warning' system is useless.  However, they have to eat, and, so, make up an imaginary world, just like warmies.

ps.  Okay, here is the prediction 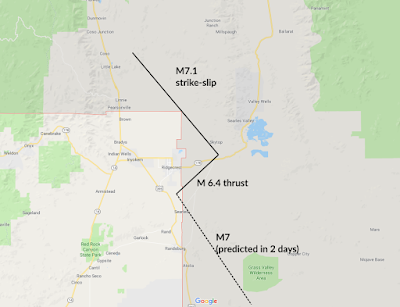 Now the busgus could be a bit more precise, but it looks like it won't bother too many people.

pps.  qualification -- if you believe this, instead of the busgus, you are nuts.

more: second quake a multiple because of places near collapse that could be fixed.  Best stay out of 70's highrises. 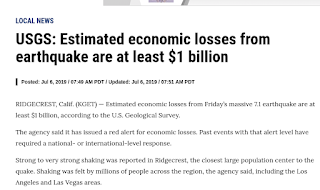 more:  The prediction window has closed.  It was a failed prediction.  Even if it happens tomorrow, it has failed.  It's just so unstable at this half-done point.  But if it happens 30 years from now, it will just in the background seismicity.  :(