The recent earthquake in California is in the same general area as the famous Kern County earthquake of 1952. 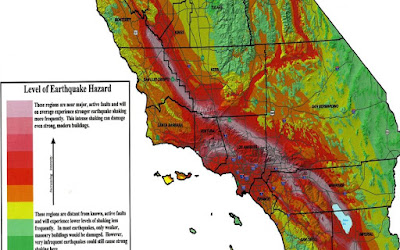 That's because the 'hammer' of the thrust on the hanging wall can throw solid rock into the air.  Nothing can survive that.  All the other big earthquakes like a subduction m9 or a San Andreas m8 can never approach this type of peak ground velocity.

You can see the San Andreas takes a bit of jog at Kern County mainly because of extremely strong rocks.  That places the area into high compression.  Thus, every big earthquake in that area will have the same thrust mechanism.

ps.  a bigger m7 strike-slip earthquake.  Since this is in strong rock with high compression, it resembles an eastern earthquake.  The busgus would have no clue.