All the doom-mongers said that Greenland would melt from the Europe stagnant air.  Ha!  This demonstrates interesting physics.

The warm air just bounces off Greenland.  This shows the permanent high pressure air over the ice, and shows the winds. 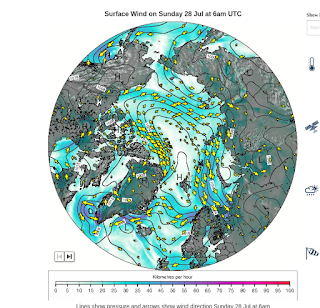 And the ice stays as cold as ever.  I never realized it before, but this demonstrates my concept of an 'ice block', which is a major component of my hypothesis for major ice advances.  No need for solar cycles. 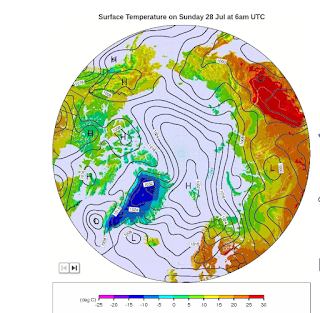 The glacier creates its own weather.  That comes mainly from the ability to shed off solar heat flux, and to maintain a high pressure zone.  This seems to only happen for continental ice sheets, the Arctic ocean has its own problems with the sea trying to melt it from below, so it isn't cold enough for weather-making.

Thus, once a continental ice sheet starts (or the Arctic ice becomes very thick), then it's a 'snowball' effect.  The true Ice Age starts.  But, as I have said, there is the little problem of the continents sinking under ice load, so we won't have this for another few thousand years.

All the papers that reported this doom won't follow through.  People will be left with the impression that Greenland is melting, and impressions are what the warmies live on.

ps. thanks to all the FB science lovers, that's the highest hits I ever got.  Wouldn't it be funny if FB led the 'Scientific Method' revival.