A long time since I wrote something about OK in the main blog.  This is a deep normal earthquake with only an Intensity of 5 right above it.  Distant stations reported a high magnitude, but the local effects were light, so they downgraded it.

I love when this happens, and this is the biggest discrepancy yet. 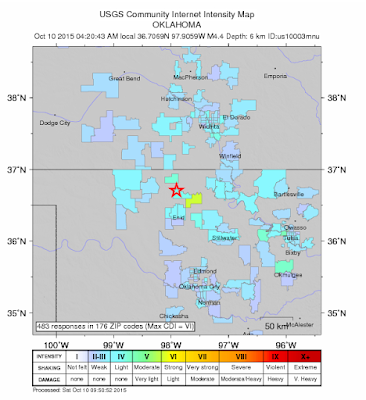 There is a huge felt area.  Had this been a thrust, you would have seen something.

Add.  Ok, I'm at the cottage now and have snagged a cell connection.  It will only last a few minutes.  This was an 'upside down' earthquake in that the main hammer went down to the centre of the earth.  The stations that reported an almost 6 are probably on the other side of the world.  With this earthquake, I predict the 'closer' will come within a year.  That's the earthquake which either destroys the city, or blows up all the oil tanks.